Home » TYPES » Trees » Pittosporum viridiflorum
Back to Category Overview
Total images in all categories: 11,528
Total number of hits on all images: 6,611,588 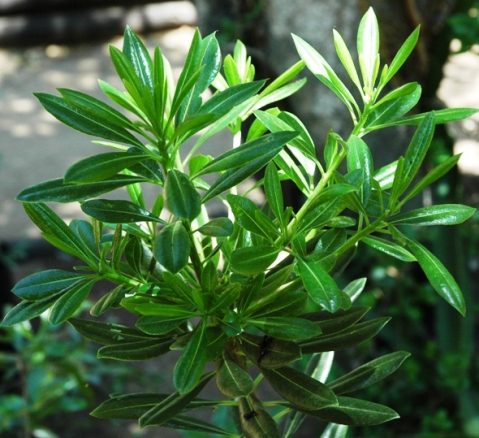 Pittosporum viridiflorum, commonly known as cheesewood or in Afrikaans as kasuur, is a large shrub, often an erect tree of 10 m in height, occasionally 20 m to 30 m (SA Tree List No. 139).

The stalked leaves are simple and alternate, spirally arranged or whorled and crowded at the ends of the branchlets.

The leaf-shape is obovate to broadly oblanceolate with tapering base and attenuating or rounded apex. The leaf colour varies from bright green or apple green to deep green and may be shiny, bright in sunlight. The veining is more prominent on the duller lower surface. Leaf margins are entire and wavy. The leaves have a distinct resinous odour when crushed, while the bark has a sweet smell and a bitter taste.

The species distribution ranges from the Western Cape southern coast to the Eastern Cape and widely across the eastern parts of South Africa, also inland. It occurs in all South African provinces apart from the Northern Cape.

The habitat is diverse, including riverine thicket, deciduous woodland, wooded grassland, scrub, rocky outcrops and evergreen forest, particularly forest margins. The tree grows in well-drained soils, found at a wide range of elevations. The species is not considered to be threatened in its habitat early in the twenty first century.

Cheesewood has become popular as a garden plant; the attractions include an erect growth form, the glossy dark foliage and the red seeds when the fruit capsules open (Venter, 2012; Coates Palgrave, 2002; http://redlist.sanbi.org).