Home » TYPES » Trees » Peltophorum africanum in flower
Back to Category Overview
Total images in all categories: 12,068
Total number of hits on all images: 7,360,695 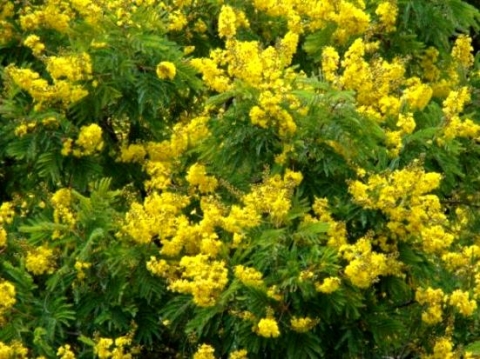 The Afrikaans name of huilboom (weeping tree) for Peltophorum africanum is caused by the nymph of a small insect, Ptyelus grossus, commonly known as a spittle-bug. It pierces the tree’s bark with its suitably adapted mouth in search of nourishment. Spittle-bugs give off a frothy substance which drips to the ground as almost pure water from this fast eating, fast metabolising insect.

The quantities of liquid thus extracted from the tree are sufficient to form pools on the ground like rainwater. Several tree species, sometimes called rain trees, are used by this insect in the spring phase of its life cycle, the time before the real rainy season starts.

This is the only species of the tropical Peltophorum genus occurring in South Africa (Coates Palgrave, 2002; Schmidt, et al, 2002).