Home » TYPES » Trees » Pavetta gardeniifolia var. gardeniifolia
Back to Category Overview
Total images in all categories: 11,662
Total number of hits on all images: 6,774,769 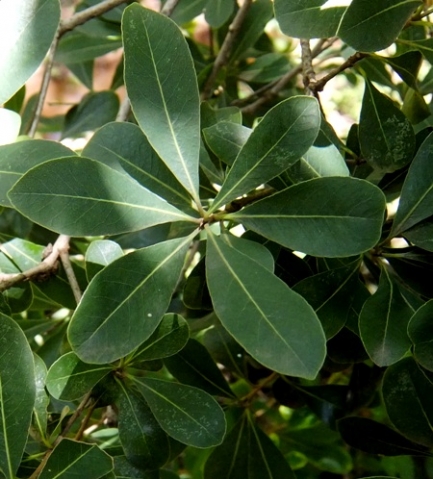 The leaf-shape is obovate to oblanceolate, varying in width, while the broadest part is nearer the tip than the base. The leaf base tapers, the leaf apex variably rounded or tapering. Leaf dimensions are variable, from 2,5 cm to 6 cm by 1,5 cm to 4 cm.

The leaves are hairless to very faintly hairy, while leaf pits or domatia found in several Pavetta species do not occur in this one. Leaf colour may be mid-green and paler below; here they are dark green on top. The pale leaf midribs are conspicuous, the spaced, ascending lateral veins faint. Leaf margins are entire.

The short leaf petioles, from 1 mm to 3 mm long, are hairless in this variety, hairy on P. gardeniifolia var. subtomentosa.

The distributions of the two varieties of P. gardeniifolia overlap much. They grow from the eastern Free State and northern KwaZulu-Natal, across most of South Africa north of the Vaal River and widely in tropical Africa.

The habitat is open woodland and bushveld, often among rocks and termite mounds. Neither variety is considered to be threatened in its habitat early in the twenty first century (Coates Palgrave, 2002; Schmidt, et al, 2002; www.redlist.sanbi.org).