Home » TYPES » Trees » Pavetta gardeniifolia
Back to Category Overview
Total images in all categories: 12,068
Total number of hits on all images: 7,360,722 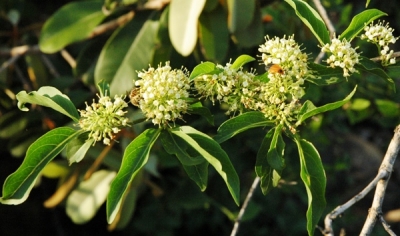 There is also the stinkleaf bride's bush common name that puts a different complexion on the plant's reputation. The leaves are opposite or clustered on dwarf twigs on stalks of about 3 mm.

In bloom the bush is laden with clusters of small white or cream flowers around year-end.

The species distribution is in the northeast of South Africa, in all provinces north of the Vaal River and KwaZulu-Natal, as well as in several neighbouring countries.

The habitat is woodland and bushveld on rocky outcrops, often granitic and sometimes on termite mounds. The species is not considered to be threatened in its habitat early in the twenty first century (Coates Palgrave, 2002; Pooley, 1993; http://redlist.sanbi.org).