Home » TYPES » Trees » Parinari curatellifolia
Back to Category Overview
Total images in all categories: 12,068
Total number of hits on all images: 7,360,592 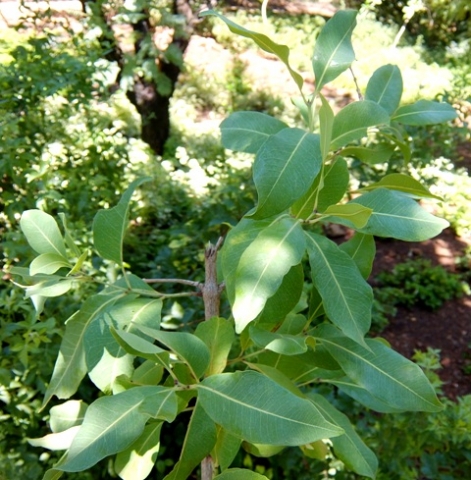 Parinari curatellifolia, commonly known as the mobola plum or in Afrikaans the grysappel (grey apple), is either a small shrub or a large evergreen, tropical tree with a rounded, mushroom-shaped crown reaching heights around 15 m (SA Tree List No. 146).

The bark is grey-brown to dark grey, rough and deeply furrowed.

The small, white, yellow or pink flowers are fragrant, growing from leaf axils in short, branched heads from midwinter to mid-spring. The fruit is large and ovoid or round, up to 5 cm long. It is a yellow-brown, fleshy drupe with scaly and pitted surface. This fruit is edible, found from mid-spring to midsummer. It is eaten raw or boiled to make syrup, also used in brewing beer.

The species distribution is the far northeast of South Africa in Mpumalanga and Limpopo, as well as widespread in tropical Africa to countries like Senegal, Chad and Kenya.

The habitat is open, deciduous woodland, typically at the base of the escarpment where it grows in sandy soils. The species is not considered to be threatened in its habitat early in the twenty first century (Coates Palgrave, 2002; Schmidt, et al, 2002; www.redlist.sanbi.org.za).