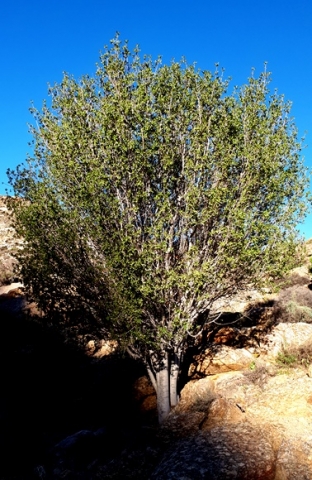 Pappea capensis is a small to medium-sized tree producing a dense, rounded crown that rarely reaches a height of 13 m (SA Tree List No. 433). Most trees vary between 3 m and 7 m tall.

The species is dioecious, male and female flowers usually growing on different trees. The pale yellow or greenish flowers grow in drooping, catkin-like racemes from leaf axils and stem tips. The catkins become up to 16 cm long.

The tree sometimes produces flowers of both sexes on the same tree and even the same catkin; first the male ones and the female ones below them near the tip. This arrangement is called androdioecious. Maybe pollination then happens partly by gravity. Flowering happens in summer and autumn.

The species distribution is in big parts of South Africa and southern Africa, barring some of the central region and the far southwest of the Cape. The tree in the photo was found growing in rocky granitic soil among the Namaqua Klipkoppe.

The habitat is varied, including diverse climatic conditions from the arid west coast where a little rain falls in winter, parts of the Karoo to high summer rainfall regions of the northeast. The tree may be found on or near termite mounds, in bushveld or wooded grassland. The species is not considered to be threatened in its habitat early in the twenty first century (Coates Palgrave, 2002; Van Wyk and Van Wyk, 2002; http://redlist.sanbi.org).