Home » TYPES » Trees » Ozoroa paniculosa
Back to Category Overview
Total images in all categories: 11,905
Total number of hits on all images: 7,155,662 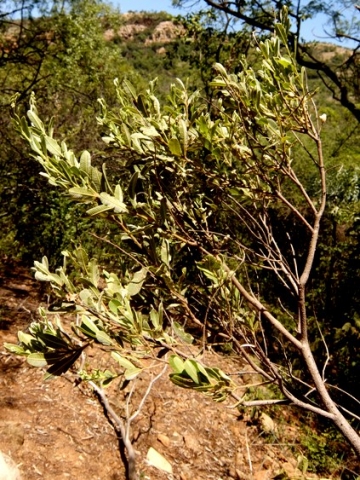 Ozoroa paniculosa, the resin tree, is a compact evergreen to semi-deciduous shrub or small tree that may reach heights around 6 m (SA Tree List No. 375). The branched stems have smooth red-brown bark at first, becoming rougher and grey on old stems.

The fragrant flowers are small and whitish, growing in small terminal heads from late winter through summer. The characteristic black, wrinkled fruit is elliptic to kidney-shaped, up to 1 cm long; it is initially shiny green with red spots.

The species is distributed in some northern parts of South Africa, in KwaZulu-Natal and north of the Vaal River, as well as present widely in tropical Africa. The habitat is deciduous woodland and bushveld, often on rocky slopes. The species is not considered to be threatened in its habitat early in the twenty first century (Coates Palgrave, 2002; Schmidt, et al, 2002; Pooley, 1993; www.redlist.sanbi.org).