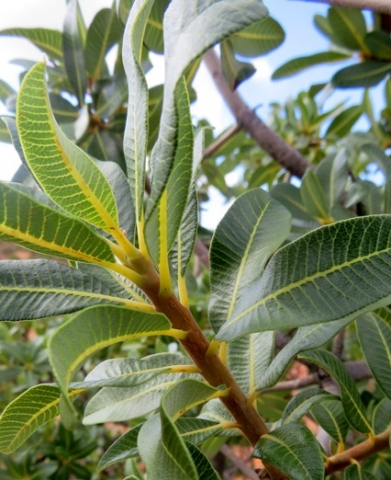 The Ozoroa dispar stem is brown with elongated white lenticels, the petioles and midribs creamy yellow and the leaf blades glossy or dull green in several shades at the healthy stem-tip. Older stems in the background are leafless and greyer, contrasting old and new life coexisting in the same tree.

Cells renew continuously in all that lives. Plants grow new parts to almost total replacement of parts while discarding old limbs with no concern and limited impact; something most animals can’t do. Animals have mobility, but only cell replacement, usually not organ replacement. People have brains that eventually gave them inside track on all three: endowed with mobility and cell replacement, they now also benefit from organ transplantation and bionic solutions.

Humanity ostensibly emerges ever stronger at the head of the pack of dominating rule-making species in the arena of the shared living space. Rapid growth in dominance may be associated with a symmetric, bell-shaped curve, a quick decline sometimes projected to match the fast rise in fortune of the species. No participating species in life on earth gets to write its own conclusion. People, however, have made a sport of speculating about the afterlife since time immemorial, even convincing themselves to have established some science in that domain.

Making the rules or ruling the roost at the top of the living world's pecking order, food chain or power hierarchy is from time to time strongly in the hands of one to a few dominant species, in people's minds mostly in theirs. Domination in the past lasted well in some cases, but every era ended in major upheaval, replaced by other life forms, the complexity growing. Talk of decline in species diversity is new and sudden in our time, a repeat of mass extinctions from very long ago.

As the species currently occupying the sapiential niche, humanity is in some ways currently too strong a rule-maker and enforcer for competitors. The rhino is gravely at risk from humans, ambivalence about insects prevail (the mosquito and the housefly not as threatened as most people would like them to be, while threat to the honeybee is a worry), plants loved on one continent are fought hard on another, while supremacy over bacteria and viruses are far from established.

Humanity is aided in asserting its supremacy by the cumulative achievements of many generations of ancestors that learnt how to manipulate components of the environment in self-interest. Tinkering with nature often turns into a domino effect of one action causing unforeseen consequences in unexpected areas, making this game a never-ending series of countermeasures.

As things stand, the next challenge of the human race lies in the field of reducing its own impact and cutting some slack or yielding some space for their fellow species on earth. Biodiversity as a common or shared interest among all that lives on earth held little appeal for humanity so far. In the future such a concession may gain importance as a matter of self-interest, humanity's strong suit.

Managing the unintended and undesirable consequences of people’s past lifestyle mistakes will, if successful, involve great deeds from this and coming generations. Such deeds may have to match or exceed achievements like pyramid building, marble sculptures like those of Michelangelo, oil paintings like those of Da Vinci and Raphael, epic literature like the works of Homer and Shakespeare, as well as world war epics, atom splitting science and moon landing technologies. We are a species in trouble, challenged to shift boundaries, to imagine and conquer at new frontiers.

The human role in preserving the earth as a suitable home for itself and, as a consequence, for the countless other species as well, is the legacy of having "tamed" the wilderness. Biodiversity is inextricably bound to our future, the relationship best described in ubuntu terms: humanity exists because all the other species exist.