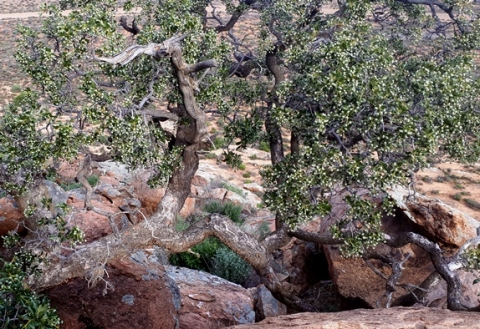 Ozoroa dispar is a semi-deciduous and much-branched, compact shrub or small tree reaching heights from 1,5 m to 5 m (SA Tree List No. 370). It is commonly known as the Namaqua resin tree, t’ôrrie (a Khoi or San name), in Afrikaans as kliphout (stone wood) or Namakwa harpuis (Namaqua resin) and at some stage botanically as Heeria dispar.

The species distribution is from the northwest of the Western Cape through Namaqualand, the Richtersveld and southwestern Namibia in the winter rainfall region. This tree was seen in the Goegap Nature Reserve.

The habitat is rocky slopes of semi-arid terrain, particularly in the Kamiesberg, Spektakelberg and the Namaqua klipkoppe where it is often rock-splitting. The species is not considered to be threatened in its habitat early in the twenty first century (Mannheimer and Curtis, (Eds.), 2009; Le Roux, et al, 2005; Coates Palgrave, 2002; Eliovson 1990; iNaturalist; http://redlist.sanbi.org).