Home » TYPES » Trees » Olea capensis subsp. capensis
Back to Category Overview
Total images in all categories: 11,921
Total number of hits on all images: 7,168,730 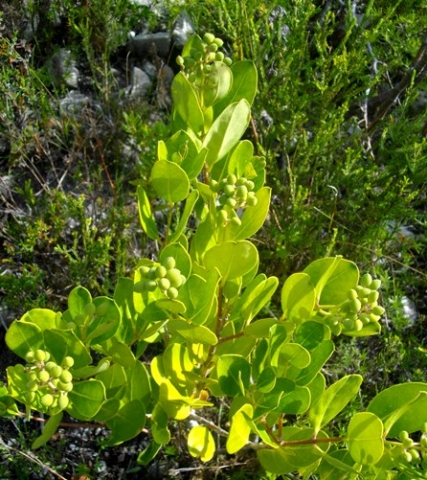 Olea capensis subsp. capensis, commonly known as the small ironwood, is more often a bushy shrub than a small tree that may reach 12 m (SA Tree List No. 618). The young branchlets are four-angled, usually covered in scattered, white lenticels.

The species is distributed in a coastal swathe in the Western Cape and the Eastern Cape from Clanwilliam to the KwaZulu-Natal border. Its habitat is forest, bush and scrub. The subspecies is not considered to be threatened in this habitat early in the twenty first century.

There are three subspecies. O. capensis subsp. macrocarpa usually bears narrower leaves and lax inflorescences. It becomes much larger than subsp. capensis. Its distribution overlaps with that of subsp. capensis in the south but continues across KwaZulu-Natal and the provinces north of the Vaal River.

The third subspecies, O. capensis subsp. enervis, is found in KwaZulu-Natal and north of the Vaal River. The distributions of subsp. capensis and subsp. enervis combined are more or less equal to that of subsp. macrocarpa (Venter, 2011; Coates Palgrave, 2002; Van Wyk and Van Wyk, 1997; iNaturalist; http://redlist.sanbi.org).