Home » TYPES » Trees » Oldenburgia grandis
Back to Category Overview
Total images in all categories: 11,411
Total number of hits on all images: 6,178,536 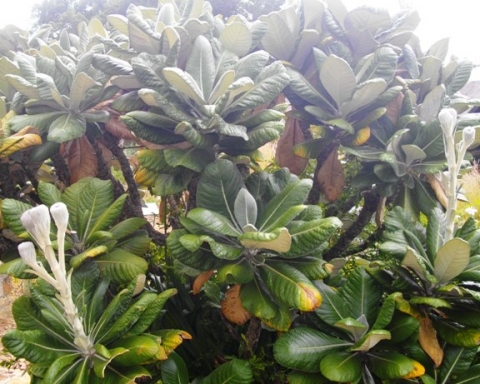 Oldenburgia grandis, commonly known as donkey’s ears or in Afrikaans as the Suurbergkussingbos (Suurberg cushion bush) and previously botanically as O. arbuscula, is a large shrub or small tree, sometimes taller than 5 m (SA Tree List No. 737). The stem often has a gnarled appearance with thick, dark, corky bark.

The species distribution is inland, south in the Eastern Cape from Port Elizabeth in the Suurberg to Makhanda (Grahamstown). The habitat is quartzite outcrops of the Witteberg. The species is not considered to be threatened in its habitat early in the twenty first century.

The plant is sometimes thought to resemble the suikerbos, a name commonly associated with several plants in the Protea genus; but it really belongs in the daisy family (Coates Palgrave, 2002; Gledhill, 1981; http://redlist.sanbi.org).