Home » TYPES » Trees » Nymania capensis flower and bud
Back to Category Overview
Total images in all categories: 11,506
Total number of hits on all images: 6,493,973 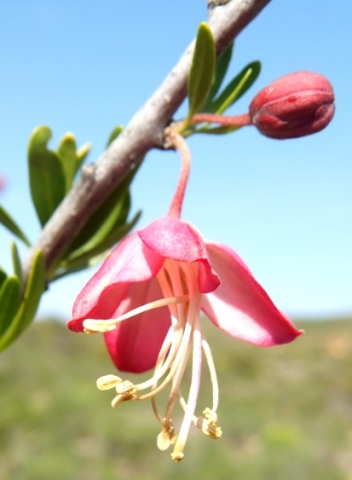 Flowering and fruiting of Nymania capensis are festive events in the small tree’s life among often parched surroundings. The fruiting is generally more spectacular than the flowering, although a nodding flower like this is not to be sneezed at… unless the pollen brings hay fever.

The pale yellow anthers of the (eight) stamens joined only at the base are oblong, flattened and ridged, held up by long, white, fleshy filaments. The tall style, topped by the slightly bulging stigma, can be spotted among them. The four ovate petals fold in along their midribs, spreading partly in the bell-shape of the corolla.

In the ovoid bud in picture the pointed sepals still reach about one third up the length of the underdeveloped bud.

Not only insects, but also sunbirds relish the nectar distributed freely to all-comers. There is no free lunch, but the contract is implicit (Coates Palgrave, 2002; Vlok and Schutte-Vlok, 2010).