Home » TYPES » Trees » Nymania capensis at the Gariep with white branchlets
Back to Category Overview
Total images in all categories: 11,506
Total number of hits on all images: 6,488,490

Nymania capensis at the Gariep with white branchlets 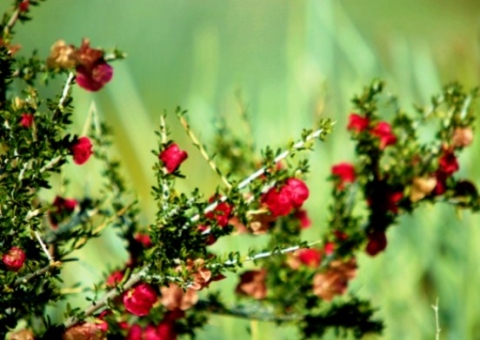 This plant was photographed in June in the Aughrabies National Park on the Gariep River (previously known as the Orange).  Nymania capensis has a large north-westerly distribution area reaching well into Namibia, separate from its Little Karoo distribution and larger than it.  The plants growing here already present some differences compared to those of the Little Karoo.

The fascicled leaves are smaller, especially shorter, while the young fruit capsules are more brightly coloured. The flowers of N. capensis trees occurring in the Richtersveld are known to be brighter and more red than their southerly counterparts. The distinctly white upper stems seen here differ from the green to brown branchlets of plants in the southern distribution area of the species. Also note the augmented branching angles on this specimen. But there is (still) only one species of N. capensis in southern Africa (Coates Palgrave, 2002; www.plantzafrica.com).