Home » TYPES » Trees » Nuxia oppositifolia flowers
Back to Category Overview
Total images in all categories: 11,401
Total number of hits on all images: 6,175,103 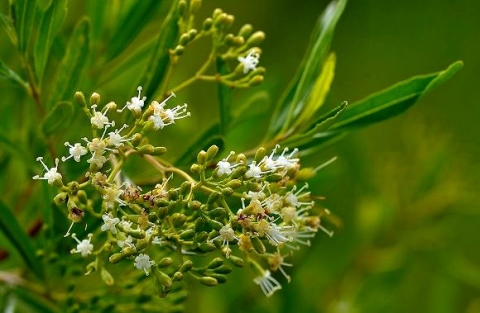 The flower of Nuxia oppositifolia starts off as an ellipsoid green bud, opening into an inconspicuous, white flower, bisexual in structure. At the back is a green calyx of four erect lobes, hairy on the inside.

The corolla tube is about as long as the calyx. The four, fleshy white corolla lobes bend outwards over the calyx, their tips short and rounded.

The four stamens arise conspicuously from the throat of the corolla, their pale anthers exserted far on straight, white filaments.