Home » TYPES » Trees » Nuxia oppositifolia
Back to Category Overview
Total images in all categories: 12,082
Total number of hits on all images: 7,379,639 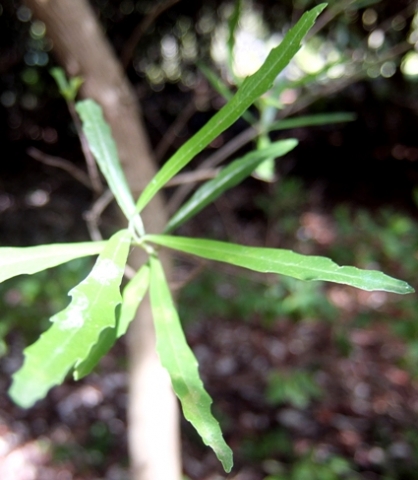 Nuxia oppositifolia, the water elder, is a multi-stemmed shrub to a small tree reaching heights to about 7 m (SA Tree List No. 635).

The leaves are opposite, sometimes growing in whorls of three. Their petioles (stalks) vary in length between 2 mm and 10 mm.

The leaves are narrowly oblong with broadly tapering or rounded apices and narrowly tapering bases that run into the petioles. The leaf margins are entire to shallowly toothed, the plant in picture has irregular teeth mainly in the upper halves of its leaves. The midrib and lateral veins are slightly raised upon the lower surfaces of the leaves. Young leaves may be hairy and slightly sticky.

The South African distribution of N. oppositifolia is restricted to northern KwaZulu-Natal and the eastern parts of Mpumalanga and Limpopo. A much larger distribution of this tree occurs in Zimbabwe, Mozambique and northern Namibia, as well as further into tropical Africa, on Madagascar and in Arabia.

The tree grows in riparian forests and thickets, even among the reeds in riverbeds. It is not considered threatened in its habitat early in the twenty first century (Coates Palgrave, 2002; Pooley, 1993; www.redlist.sanbi.org).