Home » TYPES » Trees » Morella serrata leaves
Back to Category Overview
Total images in all categories: 11,451
Total number of hits on all images: 6,213,809 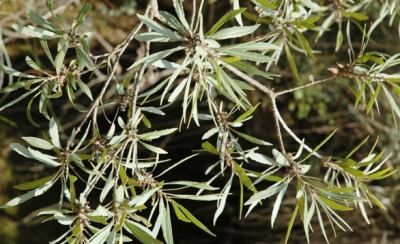 Morella serrata, previously Myrica serrata and commonly known as the lance-leaved waxberry, is a shrub or small tree, typically reaching heights of between 3 m and 4 m, occasionally 10 m (SA Tree List No. 38).

The tree has narrowly elliptic leaves with serrated margins and yellow glands on both surfaces, especially below.

The small, inconspicuous flowers grow in short axillary spikes. Female flowers are green or yellow-green, the male ones darker yellow to orange. The tree being dioecious, sexes occur on separate trees, fruit borne on the female trees.

The small spherical fruits are black when ripe, up to 3 mm in diameter and covered in a white wax.

The species distribution is along the south and east coasts in the Western Cape from the Cape Peninsula through the Eastern Cape and KwaZulu-Natal as well as inland in the eastern Free State and the provinces north of the Vaal River. The tree also grows beyond the northern border in parts of Africa.

The habitat is stream banks, high rainfall temperate forests and grasslands. The species is not considered to be threatened in its habitat early in the twenty first century (Coates Palgrave, 2002; Van Wyk and Van Wyk, 1997; http://redlist.sanbi.org).