Home » TYPES » Trees » Moringa ovalifolia
Back to Category Overview
Total images in all categories: 12,061
Total number of hits on all images: 7,359,936 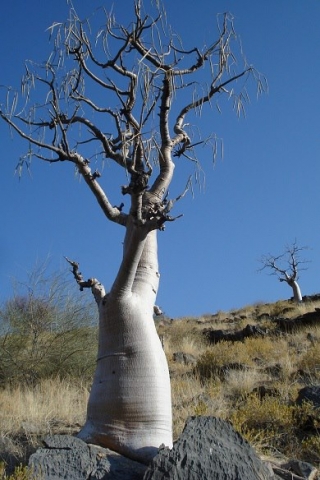 Moringa ovalifolia, commonly known as the phantom tree and in Afrikaans as the meelsakboom (flour bag tree) or sprokiesboom (fairy tale tree), is a Namibian tree, not South African and the only of its genus growing naturally in southern Africa. The tree reaches 8 m in height and for some reason has a South African Tree List number: 137.

The Indian tree, M. oleifera, is introduced in South Africa, planted for its seeds that contain oil used by watchmakers and in making soap. This exotic tree has escaped into the veld, at least in KwaZulu-Natal and Limpopo.

The squat, swollen trunk of M. ovalifolia may reach 1 m in diameter. The somewhat succulent bark is smooth and pale grey to coppery or greenish and shiny.

The spirally arranged or alternate leaves are twice compound or bipinnate, clustered near the stem-tips. There is also a terminal pinna apart from the four to seven pairs of pinnae per leaf. Each pinna in turn has two to five leaflets as well as a terminal one. The leaflets are oval or elliptic, almost hairless and darker green above than below. The veins are prominent and the margins entire.

Inflorescences grow in axillary, branched sprays of up to 45 cm long, consisting of numerous small, white flowers. Flowering happens from summer to autumn.

The fruit is a pale brown, drooping pod, triangular in cross-section and up to 40 cm long. It splits into three sections when ripe, releasing the winged, triangular seeds of up to 1 cm in diameter.

The habitat is arid slopes among rocks in sandy soil.

The sour-tasting roots serve as famine food for people, while the bark is browsed by game. The wood is light, spongy and brittle (Mannheimer and Curtis, (Eds.), 2009; Coates Palgrave, 2002; iNaturalist).