Home » TYPES » Trees » Morella cordifolia
Back to Category Overview
Total images in all categories: 12,061
Total number of hits on all images: 7,359,877 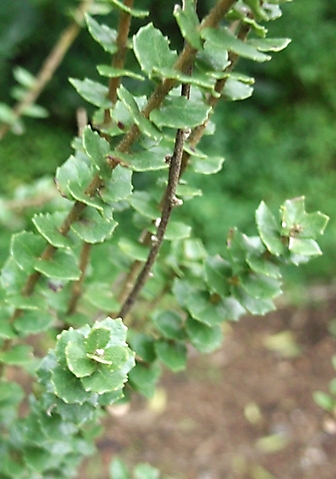 The overlapping foliage is dense, the stalkless leaves stem-clasping. The leaf-shape is ovate to nearly round with tapering tip and lobed base. The margins are unevenly and somewhat sparsely to angularly toothed. The leathery green blades are gland-dotted, more on the lower surfaces. Leaf dimensions are 5 mm to 10 mm long by 5 mm to 8 mm wide.

The tiny flowers grow in short, greenish spikes from leaf axils, the sexes on separate trees and the male spikes longer. Flowering happens from late autumn through winter, sometimes all year round.

The spherical, warty fruits are blue-grey, covered in waxy scales. The prolific, stalked fruits are up to 8 mm in diameter.

The species distribution is a narrow coastal band from Yzerfontein and the Cape Peninsula in the Western Cape to Gqeberha (Port Elizabeth) in the Eastern Cape.

The habitat is flats to near the shore and stable coastal dunes where the plants may form dense stands. The species is not considered to be threatened in its habitat early in the twenty first century.

The wax on the fruit is or was used for making candles and furniture polish. The bark was used in tanning leather and the bushes sometimes planted to stabilise dunes (Bean and Johns, 2005; Coates Palgrave, 2002; Mustart, et al, 1997; iNaturalist; http://redlist.sanbi.org).