Home » TYPES » Trees » Mimusops zeyheri flowers among the leaves
Back to Category Overview
Total images in all categories: 12,082
Total number of hits on all images: 7,379,579 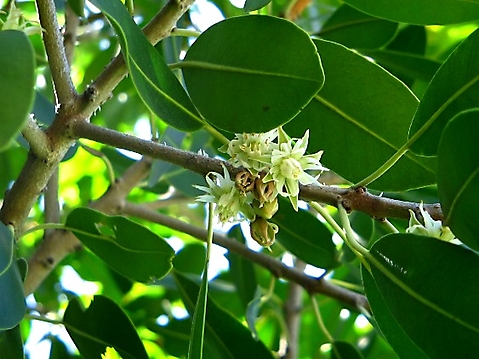 The sweetly fragrant flowers of Mimusops zeyheri grow in clusters of up to seven from leaf axils. The calyx has eight deeply divided lobes, pale green on the inside, growing in two dissimilar whorls and covered in grey hairs.

The corolla is short-tubed with eight creamy white petal lobes spreading in a star-shape to about 1 cm in diameter. Eight stamens arise from the throat of the corolla tube. The superior ovary has eight locules. The style is slender, tending to persist on the fruit.

The cream-coloured petioles of the leaves continue almost unchanged into the midribs that are more prominent on the lower leaf surfaces. Mature leaves are hairless, the upper stems grey and smooth but for scars left by dropped off leaves (Coates Palgrave, 2002; Schmidt, et al, 2002; Van Wyk and Van Wyk, 1997; Pooley, 1993; Codd, 1951; iNaturalist).