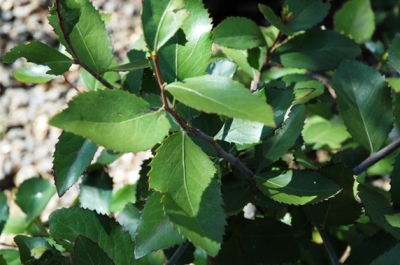 Maytenus undata, the koko tree, is a shrub or small to large tree sometimes reaching 10 m in height (SA Tree List No. 403).

There is a form of the tree in the Lebombo Mountains with more leathery leaf texture and conspicuous venation. The species resembles M. oleosa that only occurs in central Pondoland in the Eastern Cape.

The leaves are elliptic, oblong to ovate and very variable in shape. The toothed margins have small brown glands at tooth tips.

M. undata is distributed widely, particularly in the eastern parts of South Africa but found in all provinces excepting the Western Cape; also occurring widespread in southern Africa.

The habitat is mostly wooded, rocky hills, ravine forests and along forest margins. The species is not considered to be threatened in its habitat early in the twenty first century (Coates Palgrave, 2002; Schmidt, et al, 2002; Van Wyk and Van Wyk, 1997; http://redlist.sanbi.org).