Home » TYPES » Trees » Maytenus procumbens
Back to Category Overview
Total images in all categories: 11,792
Total number of hits on all images: 6,949,106 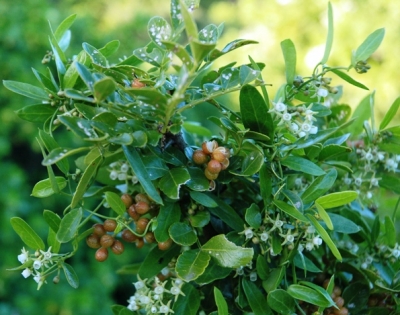 The bark is pale yellowish brown, sometimes becoming fissured on old trees. The clusters of small white to greenish white flowers may appear in winter, but may last until the end of the following summer. The almost spherical, yellow-orange capsule is dehiscent. The seeds are covered by an orange aril.

The tree occurs along much of the South African south and east coasts from the southern Cape in the Western Cape and the Eastern Cape through KwaZulu-Natal to Swaziland and Mozambique.

The habitat is dune scrub and wooded areas from near the high-water mark to altitudes of about 150 m. The species is not considered to be threatened in its habitat early in the twenty first century (Coates Palgrave, 2002; www.redlist.sanbi.org).