Home » TYPES » Trees » Maytenus oleoides
Back to Category Overview
Total images in all categories: 12,086
Total number of hits on all images: 7,381,008 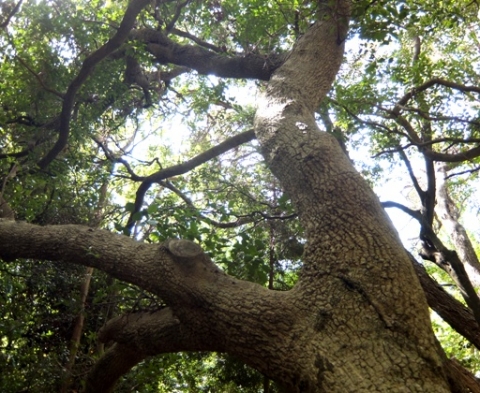 Maytenus oleoides, the rock false candlewood, is a shrub or small tree growing a rounded, often dense crown to heights around 4 m (SA Tree List No. 400).

Creamy white flowers flecked with brown grow in tight axillary clusters during winter and spring. The flowers are small and inconspicuous.

The globose, yellow fruit is two-lobed and fleshy. It reaches 1 cm in diameter before drying to an orange colour. When ripe in early summer it dehisces, releasing the seeds, each completely covered in a yellow aril.

The species distribution ranges from the Richtersveld in the Northern Cape to the Cape Peninsula  in the Western Cape and eastwards along the south coast to Uitenhage in the Eastern Cape.

The habitat is rocky mountain slopes or forest margins in fynbos, renosterveld, succulent Karoo or scrub across this large, variable region. High and low winter or summer rainfall characterise parts of this land. The species is not considered to be threatened in its habitat early in the twenty first century (Vlok and Schutte-Vlok, 2015; Coates Palgrave, 2002; http://redlist.sanbi.org).