Home » TYPES » Trees » Maytenus acuminata
Back to Category Overview
Total images in all categories: 12,086
Total number of hits on all images: 7,381,080 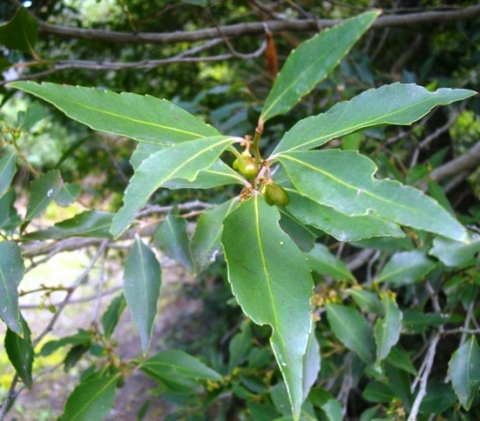 Maytenus acuminata, commonly known as the silky-bark, is a shrub or small tree of up to 8 m, rarely 15 m in forests (SA Tree List No. 398). The young stems are often reddish, similar to the young leaves.

The leaves are ovate to elliptic, leathery, dark green and sometimes glossy above. Leaves with rounded tips occur, but are the exceptions, as most taper to an acutely pointed tip. The leaf-veining is slightly translucent and prominent below. The leaves contain an elastic, rubbery substance that may be observed by breaking a leaf.

Flowers are white to creamy green with recurving petals, growing in axillary clusters. Flowering happens from midsummer, sometimes only for a couple of months, or else lasting until winter.

The fruits are globose capsules with one to three lobes. The ones in picture are green, soon to turn yellow. Upon ripening they will burst open to release seeds completely covered in red or orange arils.

The species distribution is in all provinces of South Africa, except Gauteng and North West. It is common near the coast and Lowveld but absent from the central parts and the northwest.

The habitat is mostly rocky slopes, forests and particularly their margins, as well as along watercourses. The species is not considered to be threatened in its habitat early in the twenty first century (Coates Palgrave, 2002; Van Wyk and Van Wyk, 1997; http://redlist.sanbi.org).