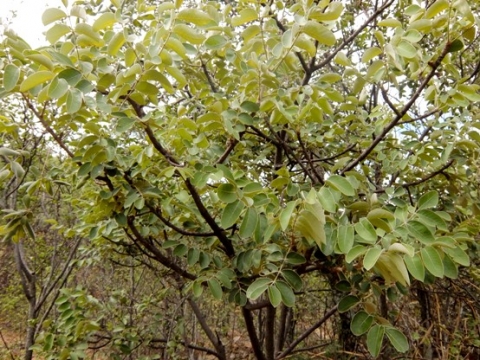 Lannea discolor, commonly known as the live-long and in Afrikaans dikbas (thick bark), is a medium-sized tree, normally with a neatly rounded crown that sometimes reaches 15 m in height (SA Tree List No. 362).

The sweetly scented flowers of this tree appear when temperatures rise in late winter, continuing through spring. The flowers are small, creamy yellow, growing in narrow, clustered spikes at stem tips. Male and female flowers appear on separate trees, the tree being dioecious.

The fruit is an ovoid drupe of up to 1 cm long, purple to black when ripe and four points or “horns” growing around its tip. The fruit is eaten by birds, animals and people.

The species distribution is north of the Vaal River from northern Gauteng and in the north of KwaZulu-Natal, apart from a big distribution in tropical Africa.

The habitat is open woodland, densely wooded ravines and rocky outcrops or steep, stony hillsides. It is often seen on termite mounds. The species is not considered threatened in its habitat early in the twenty first century (Coates Palgrave, 2002; Schmidt, et al, 2002; Pooley, 1993; www.redlist.sanbi.org).