Home » TYPES » Trees » Kirkia acuminata leafless in winter
Back to Category Overview
Total images in all categories: 10,526
Total number of hits on all images: 5,178,737 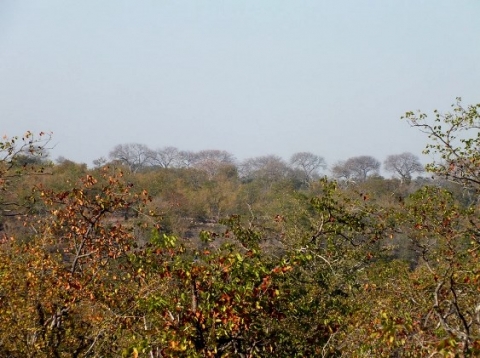 In winter, when Lowveld deciduous trees are bare and harder to identify, Kirkia acuminata stands out among its shorter neighbours, the combretums and many others. Tall and proud, even at rest, these trees are in a league of their own.

Completely leafless now, the rounded crowns composed of diminishing branches only, are etched against the hazy blue of a possibly smoke-filled sky.

The erect, single trunk is branch-free for a lengthy basal part. The bark is initially grey and smooth, becoming flaky and longitudinally streaked, sometimes knobbly. Leaf scars are conspicuous on young branches below the stem-tip new growth, where last year’s leaves had dropped off.

Confined to their ridge on the horizon, large parts of the surroundings may have not one of these white kirkias, all clustered in the spot that meets their needs (Coates Palgrave, 2002; Schmidt, et al, 2002; iNaturalist).