Home » TYPES » Trees » Kiggelaria africana fruit
Back to Category Overview
Total images in all categories: 10,683
Total number of hits on all images: 5,344,532 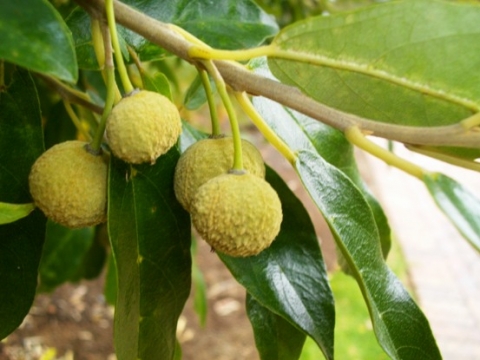 The fruit of Kiggelaria africana, the wild peach, is a spherical capsule about 1,5 cm in diameter. It follows the pale yellow or greenish white and small bell-shaped flowers that bloom late winter to summer. The tree is dioecious, with male flowers (stamens inside the petals only) and female ones (pistil inside the petals only) occurring on separate trees.

The yellow-green surface of the fruit is rough with scattered small wart-like protuberances. From about February these fruits will burst open, the surface splitting into five sections to release the seeds. They are shiny and black, but covered initially in a sticky orange to red coating. Many kinds of birds enjoy these fruits, including the crowned hornbill, the olive woodpecker, the Cape robin and the southern boubou.

When the Acraea horta butterflies fill the tree with eggs and consequently later with numerous caterpillars that eat away to just about defoliate it, more birds especially the cuckoos arrive to feed on these caterpillars.

These trees have a very large distribution area. In South Africa they occur from the Cape Peninsula all along the southern and eastern parts to Limpopo. It also grows in many southern African countries, including Zimbabwe and northwards to Kenya.

The fruits in picture were found in Kirstenbosch.  This is, of course, a female specimen of K. africana that bears the fruit (Joffe, 2001; Coates Palgrave, 2002).