Home » TYPES » Trees » Hyaenanche globosa flowers of a male plant
Back to Category Overview
Total images in all categories: 9,390
Total number of hits on all images: 4,217,873 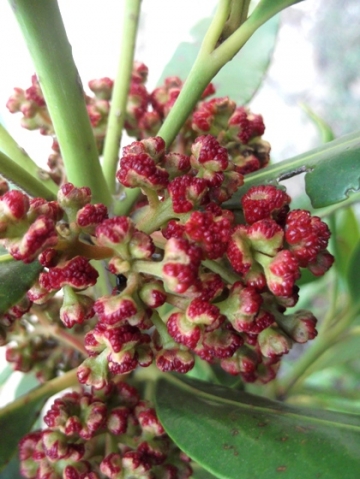 The male flowers of Hyaenanche globosa are small, growing in axillary clusters. The flowers have two whorls of sepals, but lack petals. A vestigial, non-functional ovary is found in the male flowers.

These dense flower clusters are equipped for producing prodigious amounts of pollen to be scattered by the wind. The male flowers are often tinged red as in this picture; a feature that may appear wasted on a plant not depending on pollinators other than wind.

Wind pollination is rare in South African tree species. But so is the gifboom of the Gifberg! A rare tree that says: Be careful!

This photo was taken during October in the Gifberg. Flowering occurs from midwinter to spring (Coates Palgrave, 2002; www.plantzafrica.com).