Home » TYPES » Trees » Hyaenanche globosa
Back to Category Overview
Total images in all categories: 8,897
Total number of hits on all images: 3,867,205 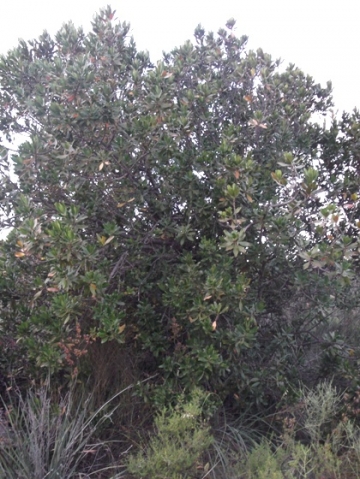 The tree is endemic to the Gifberg on the northern Bokkeveld Escarpment. This region is characterised by arid scrub habitat, exposed to extreme temperatures on rocky sandstone land. The San, whose numerous paintings still adorn rockfaces of the Gifberg, used sap from the fruit of this tree in the mix for their arrow poison.

In the past hyena were also poisoned by farmers of the area, using poison from the tree; a practice that has fortunately been discontinued. The poisonous substance contained in the plant, also commonly known as hyena poison (same name as the plant), upon ingestion produces effects similar to strychnine (Coates Palgrave, 2002; www.plantzafrica.com; Wikipedia).