Home » TYPES » Trees » Heywoodia lucens stem
Back to Category Overview
Total images in all categories: 8,907
Total number of hits on all images: 3,881,417 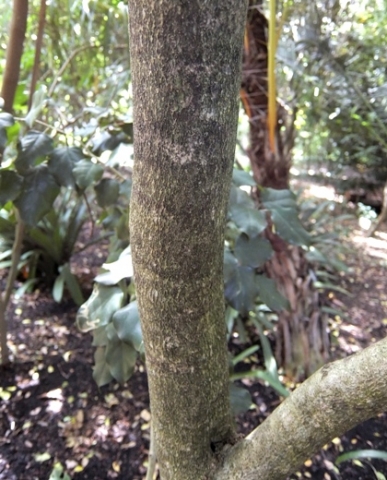 Heywoodia lucens, the stink-ebony, is a large tree of 10 m to 25 m in height (SA Tree List No. 306). The Heywoodia genus is monotypic, comprising only this one species.

The bark on the grey-brown trunk is slightly rough on old trees, flaking in large, thin patches. The trunk may reach 1 m in diameter. The wood of this tree has a coarse grain, the heartwood nearly black. While timber from the tree is hard, heavy and strong, the wood exudes a foetid smell, earning it the colloquial name of stink-ebony.

The species distribution occurs from the Transkei through KwaZulu-Natal into Mozambique and further into tropical Africa, at least to Kenya and Uganda. The tree is not considered threatened in its habitat early in the twenty first century.

The inconspicuous, small flowers of H. lucens are greenish to cream, growing in axillary heads in midspring. A flower has three sepals and five petals. The male flower has eight to twelve stamens growing in two whorls, the ovary absent. The female flower has a four-chambered ovary at the base of its style, the stamens absent.

The ovoid fruit capsule measures between 1 cm and 2 cm in diameter. It is initially fleshy, wrinkled when dry and five-sectioned. The valves split open while still on the tree late in spring or summer, each splitting further into ten segments (Coates Palgrave, 2002; Pooley, 1993; JSTOR; www.redlist.sanbi.org).