Home » TYPES » Trees » Heteromorpha arborescens var. abyssinica
Back to Category Overview
Total images in all categories: 11,110
Total number of hits on all images: 5,777,021 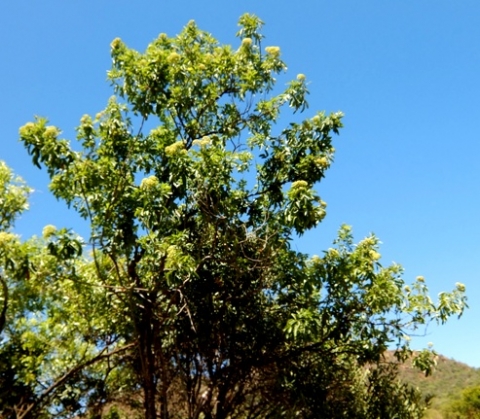 Heteromorpha arborescens var. abyssinica, the parsley tree, is but one of five varieties of this variable tree sometimes recognised (SA Tree List No. 568). The straggling, deciduous shrub or tree occasionally reaches 7 m in height.

H. arborescens in its varieties is distributed widely across the southern and eastern parts of South Africa as far west as Bredasdorp, as well as in southern Africa. Var. abyssinica occurs in a wide, but more easterly distribution.

The tree's habitat is scrub forest on rocky slopes and outcrops, forest margins and wooded ravines or bushveld thickets, often near streams from the coast to 2000 m. None of the varieties is considered to be threatened in habitat early in the twenty first century (Coates Palgrave, 2002; www.redlist.sanbi.org).