Home » TYPES » Trees » Flueggea virosa subsp. virosa
Back to Category Overview
Total images in all categories: 11,779
Total number of hits on all images: 6,931,852 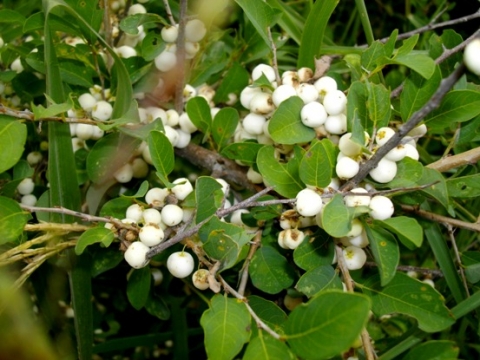 Flueggea virosa subsp. virosa, the white-berry bush, is a twiggy, deciduous shrub of up to 3 m, occasionally a small spreading tree of 4 m tall (SA Tree List No. 309).

The brown bark on the rigid branches may tend to flake. Lenticels on the youngish stem surfaces often grow in lines.

South Africa is the southern extreme of the species distribution, ranging southwards as far as northern KwaZulu-Natal and the provinces north of the Vaal. It is also found in Swaziland, Botswana and Namibia, as well as widely in Africa.

The shrub grows in woodland and at forest margins, often close to streams or on rocky outcrops and termite mounds. The species is not considered to be threatened in its habitat early in the twenty first century.