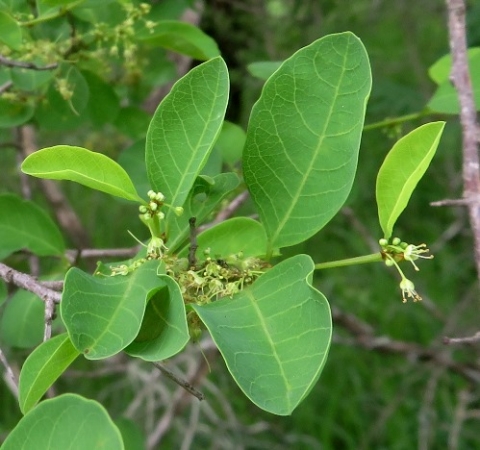 The small flowers of Flueggea virosa subsp. virosa grow in clusters from leaf axils on longish stalks. Cream to creamy green in colour, the tiny, cup-shaped corolla is short compared to the far exserted stamens or style. Inconspicuous as these flowers may be, they are sweetly scented, attractive to many insects.

The species being dioecious, the flowers in picture have stamens; don’t look here for the edible fruit later. A female flower is endowed with a short, thickish style, its conspicuous stigma branches fairly long and spreading. Both male and female flowers thus have their vital parts, anthers and stigmas respectively, prominently exposed. This is useful for ensuring successful pollination, particularly as the flowers grow on separate bushes.

These flowers were photographed in Mjejane in December. Flowering begins in mid-spring, lasting until midsummer. Fruit, initially green but white when ripe, are present until early autumn.

Similar species are Phyllanthus reticulatus with male and female flowers on the same plant bearing black fruit and Bridelia cathartica with branchlets that are not angular and the fruit red to black (Coates Palgrave, 2002; Schmidt, et al, 2002; Pooley, 1993; Codd, 1951; iSpot).