Home » TYPES » Trees » Faurea rochetiana
Back to Category Overview
Total images in all categories: 12,086
Total number of hits on all images: 7,381,141 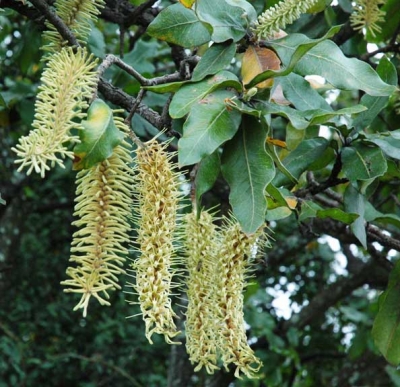 The simple leaves are spirally arranged, growing on short, thick, furry petioles. The leaf-shape is oblong to elliptic and tapering to both ends. The margins are entire and wavy. The blades are thick, glossy green and hairy when young, but glabrous on the upper surface later. Leaf dimensions are 7 cm to 17 cm long and 2,5 cm to 6 cm wide.

Many lateral veins ascend from the midrib, some branching and form a ring near the margins. The pale veining is distinct on both surfaces, more so on the lower one.

The flowers are quite striking, cream to pink, mainly appearing in pendulous spikes that turn darker in maturity. Flowering happens from autumn to early spring.

The species distribution is in Limpopo, Mpumalanga and northwestern KwaZulu-Natal, also in Swaziland, Mozambique and Zimbabwe.

The habitat is mixed woodland and mistbelt grassland on flats and slopes. The species is not considered to be threatened in its habitat early in the twenty first century (Coates Palgrave, 2002; http://redlist.sanbi.org).