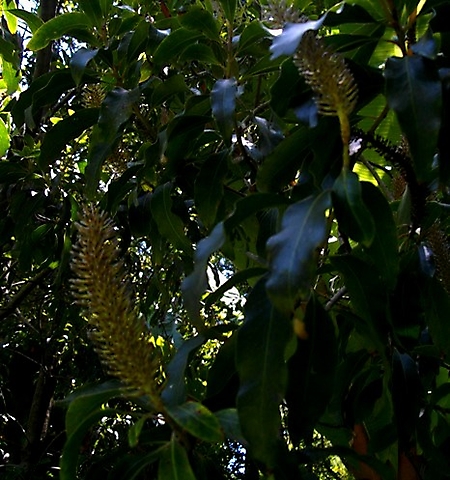 Faurea galpinii, the escarpment beechwood or forest beech, is an evergreen shrub or small tree reaching heights around 10 m, occasionally 18 m (SA Tree List No. 73). It may be erect or branching much, producing a spreading crown.

The bark is dark and rough, on some trees horizontally ringed. Young branchlets are reddish.

The leaves are simple, alternate or spiralling up the stems on red petioles of 1 cm. The leaf-shape is lanceolate, tapering to both ends, the margins entire. The blades are dark green and leathery. Their midribs are cream and conspicuous, the lateral veins ascending. Leaves become up to 10 cm long and 2,5 cm wide.

The species distribution is in Limpopo and Mpumalanga, from the Wolkberg in Limpopo to Barberton in Mpumalanga and to Eswatini.

The habitat is scarp forest and forest margins, sour bushveld and mistbelt grassland at high elevations of the northern Drakensberg and the Steenkampsberge; the trees often found among rocks along vegetated drainage lines. The species is not considered to be threatened in its habitat early in the twenty first century, although it is affected by invading exotic vegetation (Coates Palgrave, 2002; Schmidt, et al, 2002; http://redlist.sanbi.org).