Home » TYPES » Trees » Faidherbia albida bark
Back to Category Overview
Total images in all categories: 11,921
Total number of hits on all images: 7,169,355 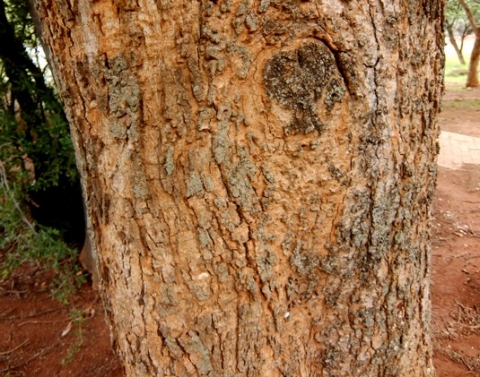 Faidherbia albida that used to be called Acacia albida, is a spreading, erect tree becoming large, up to 30 m tall (SA Tree List No. 159). It is commonly known as the ana-tree.

On old stems its bark is variable between rough and brown, sometimes dark brown, or smooth and greenish grey. Young stems are white to ashy, their shapes zigzagging from node to node.

Short, straight spines (about 2 cm long) occur along the younger stems. The spines are cream-coloured with brown tips, not inflated.

The tree only grows in the most northerly region of South Africa, in parts of Limpopo, Mpumalanga and North West. It is more widespread in Namibia, Botswana, Zimbabwe and further north.

The habitat is bushveld, often on alluvial floodplains, but also riverbanks, swamps and seasonal watercourses. The species is not considered to be threatened in its habitat early in the twenty first century (Coates Palgrave, 2002; Van Wyk and Van Wyk, 1997; http://redlist.sanbi.org).