Home » TYPES » Trees » Erythrophysa alata
Back to Category Overview
Total images in all categories: 12,086
Total number of hits on all images: 7,381,183 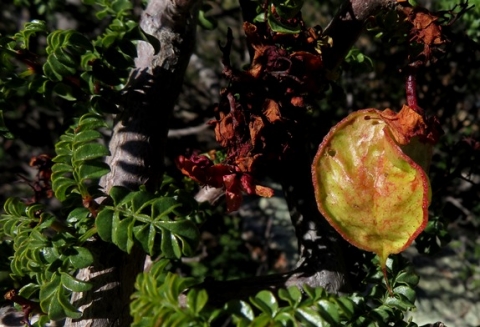 Erythrophysa alata, commonly the Namaqua red balloon or in Afrikaans as the Namakwarooiklapperbos (Namaqua red cracker bush), is a much-branched shrub or small tree growing to heights from 3 m to 4 m (SA Tree List No. 436).

The red flowers are showy, the petals spurred and the stamens conspicuously protruding, about 2 cm long. Flowers become 1,6 cm to 2 cm in diameter. Flowering happens in autumn.

The outline of an uninflated fruit shows the definite marginal rim and pronounced tip, acutely pointed. The softly undulating surface in the ring is creamy green suffused with pink. Not quite a fairy dancefloor, but in Namaqualand a particular jumpy reel dance is fashionable; one that won’t leave a pliant floor without indentations from vigorous stepping. (Would a predominantly lean and wiry populace imagine fat fairies?)

The pale grey bark on the stem in picture is rough, tending to flake in irregular patches. The bark of this bush may also be brown. If these weird leaves were not attached by petioles to a tree, they might be expected to start walking about like weird green insects from Mars or somewhere as exotic.

The species is distributed in the northwest of South Africa and in Naukluft in southern Namibia.

It grows in arid conditions on low outcrops on rocky slopes. The little rain received here arrives in winter. The species is not considered to be threatened in its habitat early in the twenty first century (Coates Palgrave, 2002; Williamson, 2010; Van Wyk and Van Wyk, 1997; iNaturalist; http://redlist.sanbi.org).