Home » TYPES » Trees » Ensete ventricosum fruit
Back to Category Overview
Total images in all categories: 11,506
Total number of hits on all images: 6,503,257 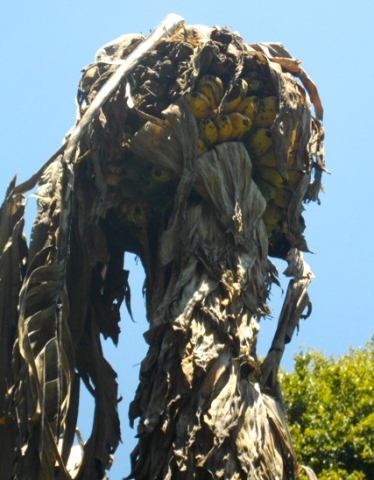 The just about inedible fruits of Ensete ventricosum look like a cluster of small bananas in leathery, yellow skins. A mass of hard globular seeds like black peas is produced inside, nothing like a real banana. The fruit is indehiscent, i.e. it doesn’t burst open when ripe. Fruits are on the plant in summer to early autumn.

E. ventricosum yields an important foodstuff in some mountainous parts of rural Ethiopia. It is not the fruit that is eaten though, but the pulp in the stems and rootstock that is pounded into a meal. This foodcrop is important to its users as it yields much per plant, more than cereals in their drought-prone conditions. The outer fibres, separated from the pulp are then also used for cordage and sacking.

This (January) photo shows the fruit among dead leaves and bracts, the plant’s life cycle and mission accomplished from a single fruiting (Coates Palgrave, 2002; Wikipedia; Van Wyk and Van Wyk, 1997).