Home » TYPES » Trees » Ensete ventricosum flowers
Back to Category Overview
Total images in all categories: 11,411
Total number of hits on all images: 6,181,934 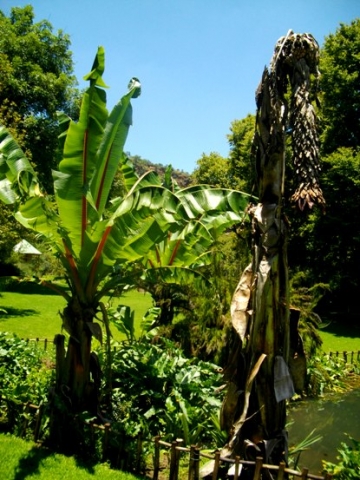 The flowers of Ensete ventricosum grow from the middle part of the erect stem in massive, pendulous spikes, up to 3 m long. The male flowers usually occur at the tip and the female or bisexual flowers lower down. Each flower has a single petal, in bisexual ones there are five stamens and a three-chambered, inferior ovary. Large, maroon-coloured bracts shaped like spathes are positioned around the flowers.

Flowering happens late in spring. The spike lasts for about a year. The plant dies after the flowers have turned into fruit.

The photo was taken in January in the Walter Sisulu National Botanical Garden, when flowering on the dying plant on the right was already over (Coates Palgrave, 2002; Wikipedia; Van Wyk and Van Wyk, 1997; http://pza.sanbi.org).