Home » TYPES » Trees » Ensete ventricosum
Back to Category Overview
Total images in all categories: 12,081
Total number of hits on all images: 7,379,223 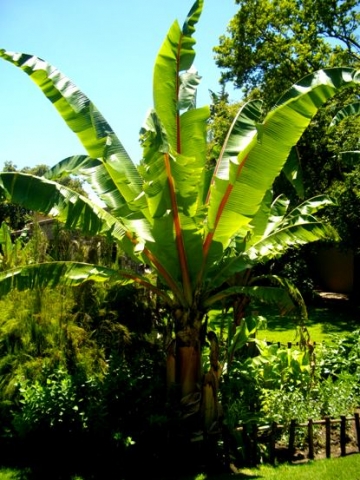 Ensete ventricosum, the wild banana or Ethiopian banana, is a monocarpic, fleshy-stemmed tree that reaches heights of 6 m to 12 m (SA Tree List No. 31). Monocarpic denotes plants that flower only once, after which they die; E. ventricosum flowers and fruits after about eight years, then dies.

Real bananas come from plants of the Musa genus and are not monocarpic. The Ensete genus comprises about eight species of monocot plants. Four of them occur in tropical Africa and only this one has a distribution extending to South Africa.

Ensete plants resemble some members of the Strelitzia genus, but their leaves have short petioles and pink midribs, the flowers occur in pendulous masses. The conspicuous bracts around the flowers are maroon and saucer-shaped.

The species distribution of E. ventricosum in South Africa is restricted to a part of central Limpopo. The plant also grows in tropical Africa to Ethiopia where it is used as a staple foodcrop.

The habitat is high rainfall forest, forested ravines and streambanks. The species is not considered to be threatened in its habitat early in the twenty first century (Coates Palgrave, 2002; Wikipedia; Van Wyk and Van Wyk, 1997; www.redlist.sanbi.org).