Home » TYPES » Trees » Englerophytum natalense
Back to Category Overview
Total images in all categories: 12,091
Total number of hits on all images: 7,393,266 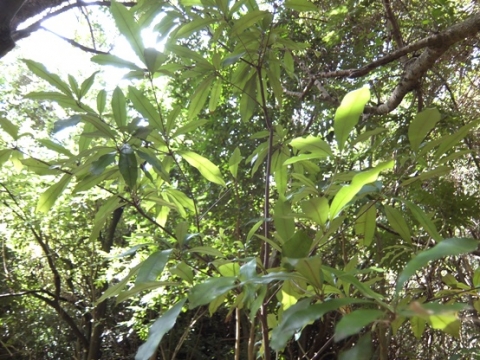 Englerophytum natalense, the silver-leaved milkplum or Natal milkplum, is a small to medium-sized tree of 4 m to 10 m in height, rarely 20 m (SA Tree List No. 582).

The bark is grey to brown and smooth until it starts flaking. The straight trunk may be fluted, its branches growing horizontally.

The species distribution is along the east coast in the Eastern Cape and KwaZulu-Natal, as well as in the Mpumalanga Lowveld, Swaziland and southern Mozambique.

The habitat is evergreen and coastal forest, often occurring in forest understoreys and margins or forested ravines, sometimes growing in groves. The species is not considered to be threatened in its habitat early in the twenty first century (Coates Palgrave, 2002; Pooley, 1993; Van Wyk and Van Wyk, 1997; http://redlist.sanbi.org).