Home » TYPES » Trees » Englerophytum magalismontanum unripe fruit
Back to Category Overview
Total images in all categories: 12,087
Total number of hits on all images: 7,393,061 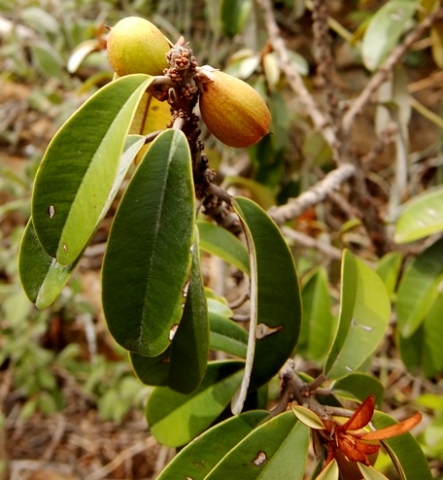 The stems of Englerophytum magalismontanum are covered in smooth, grey bark; in picture pale on the leafless lower parts. Young stems are also covered in brownish hairs.

The leaves often crowded at stem tips are elliptic to narrowly obovate and folding in along their midribs; more so when young. Leaf apices are rounded, sometimes notched and often with a hair-like tip. The leaf base tapers narrowly, the petiole stout, from 1 cm to 2,5 cm long. Leaf margins are entire and tightly rolled under. There are leaf stipules by the base of the petiole that persist for a while.

Glossy dark green above, the lower leaf surfaces are covered in reddish brown to silvery hairs. Hairiness is initially more and spread all over the young leaves in a bright russet colour, conspicuous in the photo.

The flowers of the stamvrug grow in compact clusters on both new and old wood from axils of fallen leaves. They are brownish pink or purple, about 1 cm long, growing on distinct stalks. Flower scent is strong, not exactly pleasant. The buds are covered in rusty hairs. Flowering happens in summer.

The much-eaten fruits often grow on short spur-branches and densely clustered on old wood. The ellipsoid, fleshy berry becomes 2,5 cm long, usually containing one seed. The fruit is red when ripe. Its flesh is purple and a sticky white juice emerges from the leathery skin. Remains of the persistent style forms a sharp tip on the fruit. Stamvrug consumers include people, birds, baboons, monkeys and bushpigs (Coates Palgrave, 2002; Van Wyk and Van Wyk, 1997; Pooley, 1993).