Home » TYPES » Trees » Elephantorrhiza burkei
Back to Category Overview
Total images in all categories: 11,793
Total number of hits on all images: 6,941,719 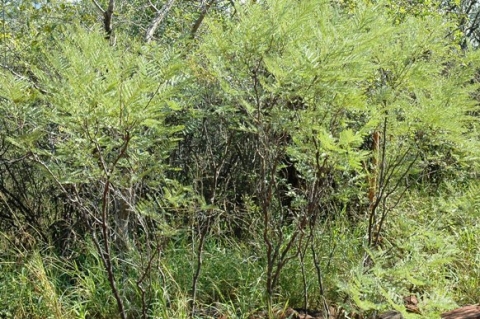 Elephantorrhiza burkei, the elephant root, sumach bean or in Afrikaans basboontjie, varies much in size, between a 30 cm shrublet and a deciduous tree of 6 m (SA Tree List No. 193).

The fragrant flowers grow in sparse spikes about 10 cm long. They are small, creamy white, yellowing when older. There is a small, red gland at the base of each flower. Flowering happens in spring, simultaneously with the leaves.

The fruit is a red-brown, pendulous, woody pod. Old pod edges can be seen persisting on the plants well after partial disintegrating and the seeds gone.

The species distribution is in all the provinces north of the Vaal River, as well as in some neighbouring countries. The photo was taken near Burgersfort.

The habitat mainly consists of rocky slopes in bushveld. The species is not considered to be threatened in its habitat early in the twenty first century (Coates Palgrave, 2002; Schmidt, et al, 2002; http://redlist.sanbi.org).