Home » TYPES » Trees » Dichrostachys cinerea
Back to Category Overview
Total images in all categories: 11,921
Total number of hits on all images: 7,169,076 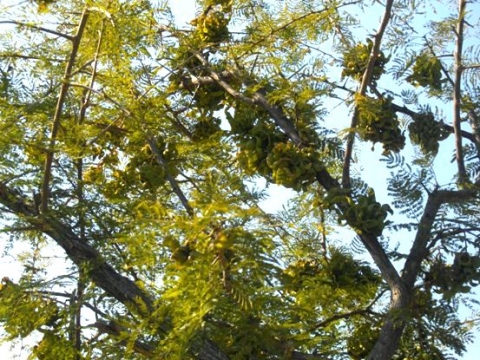 Dichrostachys cinerea, the sickle-bush, is a shrub or small tree reaching heights from 2 m to 7 m (SA Tree List No. 190). Shrubs of 2 m to 3 m with spreading, untidy or sometimes rounded or flat crowns are common, even invading.

Whether the sickle-bush grows naturally in Australia and India, or through the unfortunate invasion by yet another African exotic brought about by human action, is uncertain.

The bark becomes rough and often fissured on lower branches of older trees. The bark colour varies from yellow, grey-brown to quite dark. Young branches are smooth and pale green. Stems do not reach great thickness, rather branch and intertwine into convoluted, bushy shapes.

The spines of this species are not modified stipules at leaf bases as commonly found on African thorn trees, thus unlike the "thorns" of thorn trees. They are hardened, dwarf spur-branches that develop sharp unyielding tips. This is why they don’t grow in matched pairs on branches and sometimes have leaves growing on them.

The species distribution is widespread in the east and north of South Africa, as well as in tropical Africa. It occurs in all the provinces apart from the Western Cape and the Free State.

The vast diversity of habitats occupied by this tree has led to great diversity in the adaptations it has made. There are at least ten subspecies and 11 varieties on record. The species is not considered to be threatened in its habitat early in the twenty first century (Coates Palgrave, 2002; www.plantzafrica.com; http://redlist.sanbi.org).