Home » TYPES » Trees » Dalbergia melanoxylon
Back to Category Overview
Total images in all categories: 12,061
Total number of hits on all images: 7,359,874 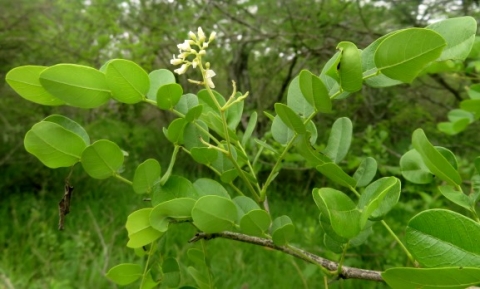 Thickets of these trees growing in clayey soils are sometimes seen. The name zebrawood is derived from the contrast between the yellow to whitish sapwood and the dense, purplish heartwood that turns black once exposed.

The roots have been used in a remedy for toothache and bark extracts serve in treating open wounds. Elephants will break the tree to eat the roots.

The species distribution in South Africa is limited to the far northeast of the country, the Mpumalanga and Limpopo Lowveld.

The habitat is mixed woodland and knob-thorn savanna where the trees often occur on rocky outcrops and termite mounds. The species is not considered to be threatened in its habitat early in the twenty first century (Coates Palgrave, 2002; Schmidt, et al, 2002; Grant and Thomas, 2001; iSpot; http://redlist.sanbi.org).