Home » TYPES » Trees » Dais cotinifolia
Back to Category Overview
Total images in all categories: 11,523
Total number of hits on all images: 6,599,434 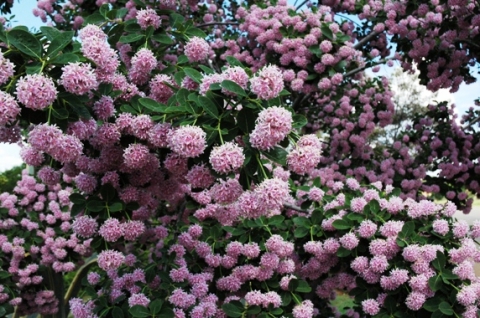 Dais cotinifolia, the pompon tree or in Afrikaans kannabas, is a shrub or small tree reaching heights from 3 m to 7 m, occasionally in forests more than double that (SA Tree List No. 521). Late spring and summer blooming brings masses of pink-mauve flowers that make the tree a garden favourite.

The leaves are simple, opposite (sometimes sub-opposite or scattered) and often crowded at near stem-tips. The leaf-shape is oblong to elliptic or obovate with rounded base and obtusely pointed tip. Leaf margins are entire, the slightly raised pale lateral veins and midrib are conspicuous.

The fruit is a small red-brown nutlet inside the floral tube or hypanthium, subtended by the by now woody brown bracts.

The species distribution is widespread in the eastern part of South Africa, in most of the summer rainfall region. It also grows in Mozambique and Zimbabwe.

The habitat is evergreen forest margins, riparian forests and rocky kloof thickets. The species is not considered to be threatened in its habitat early in the twenty first century.