Home » TYPES » Trees » Cunonia capensis trunk
Back to Category Overview
Total images in all categories: 11,538
Total number of hits on all images: 6,618,562 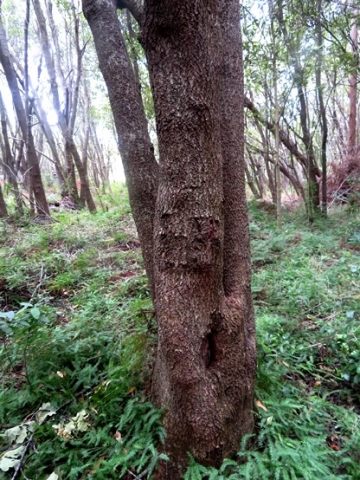 The Cunonia capensis trunk is tall and straight in ideal conditions, the moist, cool to mildly warm, sometimes montane forests and secluded ravines where it flourishes. This is when heights up to 30 m can be achieved, the boles massive. In other places trees of under 8 m are common.

The butterspoon tree, one of this tree's common names, may display bulges upon its trunk representing earlier branches and growth events. The one in picture is developing some.

A stand-alone red alder or in Afrikaans rooiels (red awl), as the tree is also known, will gain less height by investing in stronger spread of branches retained to quite low down. This results in a rounded, spreading crown that may become sparse on very large and old trees. The tree is a comparatively fast grower among its counterparts in South African indigenous forests.

A shrub-like growth form results from harsh conditions often found in parts of the broad coastal strip from the Western Cape to KwaZulu-Natal where it may be encountered in nature. High rainfall forest comfort as found near Knysna is not a common luxury in much of the South African countryside, even in the species distribution. C. capensis often survives fire, but its subsequent growth achievements are likely to be reduced.

The butterspoon tree grows bark that is initially pale greyish and flaky. It turns dark brown, fissured and rough with age, even corky on old trees, while the very young stems are pinkish to wine-red.

The wood is pale to brown-red or a rich red, sometimes with white flecking and even some black stains. The timber is fine-grained, even-grained and hard, although timber-sized trees are uncommon.

The wood works easily in turning and manufacturing of furniture and household utensils. In olden times this wood featured in wagon-building for the making of spokes and felloes (Venter, 2011; Coates Palgrave, 2002; Van Wyk and Van Wyk, 1997; Pooley, 1993; Rycroft, 1980).