Home » TYPES » Trees » Cunonia capensis butterspoon or els
Back to Category Overview
Total images in all categories: 11,538
Total number of hits on all images: 6,618,360 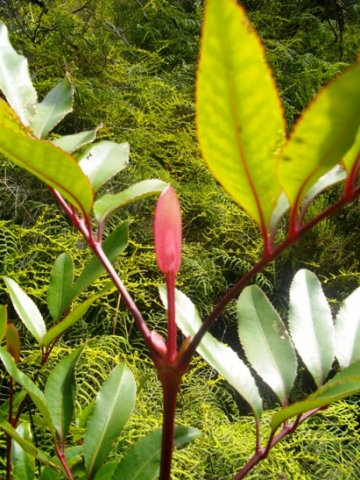 The reason for the rooiels or butterspoon tree names of Cunonia capensis can be observed in the picture. The erect, reddish butterspoon or awl (els in Afrikaans) at the young stem-tip consists of two tightly appressed stipules that hold the next growing bud between them.

The pair will open to release the protected leaf or flower growth later. Another els will be formed a little higher up, repeating the process. When the new pinnate and opposite, coppery leaf pair appears, it is initially covered in short greyish hairs that will disappear to yield shiny dark-green mature leaves.

Note the two small butterspoon structures arising in the leaf axils beside the tall erect one. They will grow into branches or inflorescences on the side of the main stem if all goes well (Van Wyk and Van Wyk, 1997; Poynton, 1975).