Home » TYPES » Trees » Cunonia capensis
Back to Category Overview
Total images in all categories: 11,506
Total number of hits on all images: 6,499,062 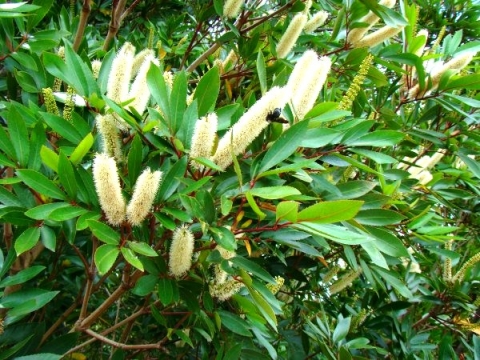 Cunonia capensis, the rooiels (red awl) or butterspoon tree, is a small to medium, evergreen coastal tree (SA Tree List No. 140). There is only this one South African species in the genus that is, however, not monotypic as there are more species (about 16) in New Caledonia near Australia.

The common names are derived from the stem-tip pair of cohering stipules on a long stalk, appressing the new growth and resembling a butterspoon or an awl (els in Afrikaans).

The leaves are opposite, compound with a terminal leaflet, lanceolate with entire margins and are attractively dark green (imparipinnate). Young leaves are usually red and glossy.

The flowers are conspicuous creamy spikes blooming in summer and autumn. The fruit is a leathery capsule.

The species is distributed in nature from the Cape Peninsula along the south and east coasts of South Africa to Swaziland and Mozambique. This tree grows near rivers and in moist forest areas at low altitude. The species is not considered to be threatened in its habitat early in the twenty first century.

The insect on the flower in picture is one of thousands (apart from birds) that frequent this tree in the blooming season (Coates Palgrave, 2002; www.plantzafrica.com; www.redlist.sanbi.org).