Home » TYPES » Trees » Cryptocarya woodii
Back to Category Overview
Total images in all categories: 11,528
Total number of hits on all images: 6,614,453 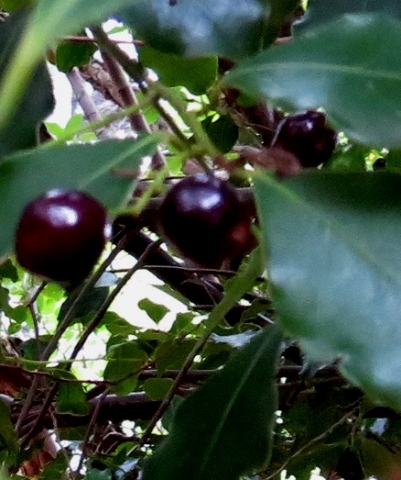 Cryptocarya woodii, the river wild-quince or Cape quince, is a small to medium-sized, evergreen tree reaching heights from 4 m to 10 m (SA Tree List No. 116).

The greenish white flowers grow in axillary clusters. Flowering of C. woodii happens in spring and summer. The very small flowers of all Cryptocarya species have perianth sections in two whorls of three in the monocot way. The ovary is completely covered by the receptacle. The generic name, Cryptocarya meaning hidden fruit is derived from the way the fleshy receptacle grows around the hard seed.

The spherical, thin-skinned fruit is a drupe, purplish black when ripe and up to 2 cm in diameter. It is seen late in spring to autumn.

The species distribution is in the east of South Africa, from the Eastern Cape and KwaZulu-Natal to Mpumalanga and Limpopo, as well as in some neighbouring countries including Eswatini and Mozambique.

The habitat is woodland or thicket, evergreen forest margins, steep slopes and riverine forest. The species is not considered to be threatened in its habitat early in the twenty first century.