Home » TYPES » Trees » Cryptocarya myrtifolia
Back to Category Overview
Total images in all categories: 11,538
Total number of hits on all images: 6,621,879 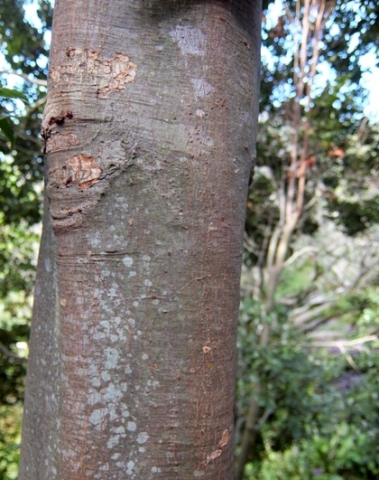 Cryptocarya myrtifolia, the myrtle wild-quince, is a medium to tall tree of 10 m to 20 m in height (SA Tree List No. 115). The stem seen here has fairly smooth, brown bark. Its young branches are velvety from an early dense covering of hairs.

The tree grows in the Eastern Cape, KwaZulu-Natal and the Mpumalanga Lowveld, as well as in Eswatini (Swaziland) and in southern Mozambique.

The habitat is evergreen forests, often in the mist-belt, on steep slopes and in ravines close to watercourses, from low to medium elevations. The species is considered vulnerable early in the twenty first century, due to urban expansion around Durban, bark harvesting for use in traditional medicine and deforestation (Coates Palgrave, 2002; Pooley, 1993; www.redlist.sanbi.org).